Board Games: Agents of Good or Evil? 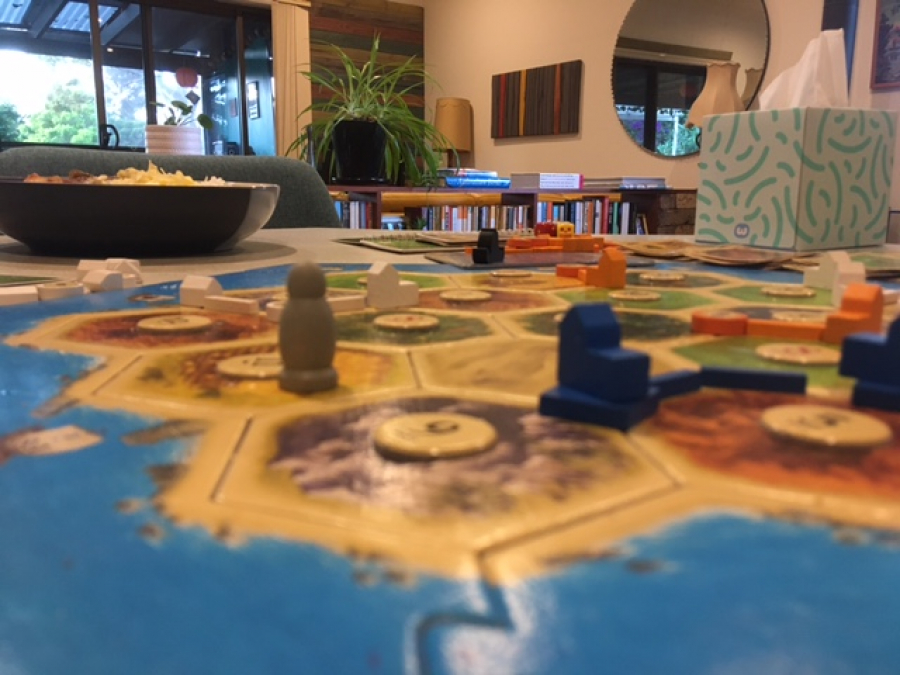 Like many others of a similar vintage, I grew up with board games that may as well have been - and in fact probably were - agents of propaganda for the neo-con, neo-liberal capitalist war machine.

The obvious being Monopoly, of course, the boring as batshit game of moving pieces around the board, buying and selling land so that you can be the ultimate real estate mogul, and where winning, much like capitalism in real life, is predicated on everyone else losing.

I guess it could be said though, that playing a game based entirely on securing real estate not only prepares you for the cut-throat reality of living in Sydney, but also, for every boring dinner party conversation you are bound to have about it while being here.

Monopoly has long had a bad rep from lefties as a vehicle for political indoctrination, which seems kinda obvious for a game where the person who owns the fanciest street in town also usually ends up owning all the public assets and infrastructure too. It is so close to real life that some claim it is the Quintessential Symbol For Capitalism, but;

Fun fact: it was invented by a rebellious, leftwing, feminist from the 1800s who wanted to demonstrate the evils of inequality stemming from property ownership. Her original version of the game included two set of rules; an anti-monopolist set in which all were rewarded when wealth was created, and the other, a monopolist set in which the goal was to crush opponents. Some bloke then came along and ripped off her version of the game, and you can guess set of rules survived afterwards.

For my generation, the game–maker-powers-that-be didn’t stop with Monopoly, because, land and wealth must, of course, be protected, so we also got to practice warfare techniques with games like Battleship, the navel combat game of blowing your opponents ships out of the water, but from behind a screen and in a calculated and sanitised set up, so that, just like real masters of war, you never had to get your hands dirty.

Fun fact: I wasn’t even supposed to be playing it, according to the promo material, I should have been joyfully washing the dishes with the other women in the background. 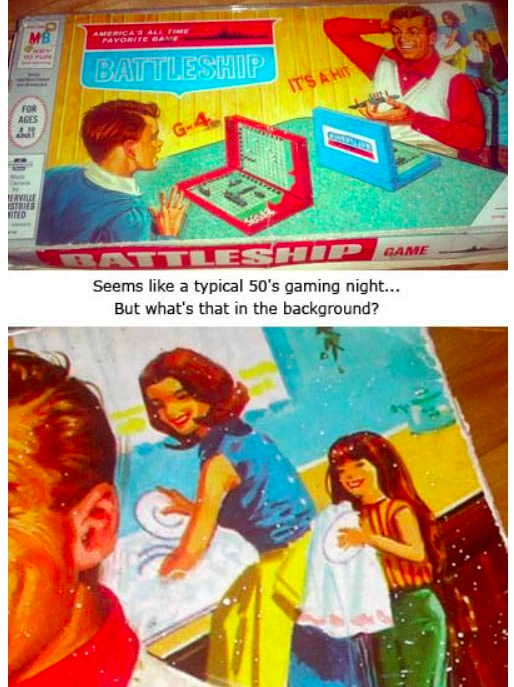 Certainly, worst of all from our childhood though, was the Game of Life - even the title was straight up prescriptive!

The game was the epitome of hetro-normative, conservative, capitalist agenda. It was advertised as simulating a person’s “travels through life, from college, to retirement, with jobs, marriage and children along the way” (you literally move a plastic shaped Sedan around the board that comes with enough space for your future spouse and children).

Ah, simulating whose life, now? I hear you ask. Why that of the compliment, moral, righteous, moneymaker, obviously. The entire game was a script for how to live Real Life…according to ScoMo and his new-to-power-mate Parrotet.

Fun fact: while the 1960s version of the game introduced the more dichotomous millionaire  aspect  - once a player reached the "Day of Reckoning" tile they could attempt to become a "Millionaire Tycoon", but if they failed they were bundled off to the “Poor Farm"  - moral instruction itself was firmly rooted in the original 1800s version that featured tiles of “poverty”, “ruin” and “disgrace”.

Because, when indoctrinating people into the Real Life script, shame is a useful way to demonstrate that any problems encountered in life are entirely due personal failings and deficits, and nothing to do with the structural fabric of society at all.

The minds of the young are ripe and rich, however, so using board games to espouse cultural and political propaganda in this almost subliminal way (minus Game of Life, of course, which is about as subtle as a smack across the head) could be called a stroke of genius, nicely complimenting shows like Home and Away that the family can tune into afterwards to more firmly cement the messages.

But once you are older and wiser and see the ruthless quest for real estate and rigid, moralistic games for what they are, it can come as a shock for your childhood self, who once scrambled to make the most money of all while blowing up their opponents. So when, as an adult, with my cynicism and questioning of the dominant discourse firmly in place, a colleague suggested that I play Catan with my family, describing it as a game of conquering new territory through trade and development, my response was swift: no way.

How could I, who had come to shun the obvious capitalist promotion of Monopoly and preaching of Game of Life, embrace a game where the entire premise is based on and rapacious development of natural resources in order to build the biggest trading centre and stronghold?

It was heading into LD1.0 that I came home clutching a Catan box under my arm – while others got busy basking bread I got busy breaking my son’s iron will aversion to family board games.

Catan comes with a 16-page rulebook and almanac (both a word and concept I was completely unfamiliar with, raised as I was on a diet of simplistic, if morally dubious, board games) all in 8pt font, so reading the rules alone got us half way through LD.

And then, once we got the hang of it, the game became the number 1 feature of our LD household and was rarely, if ever, packed away from the kitchen table, becoming a kind of Lazy Susan made of hexagonal tiles and game pieces, complimenting our family meals.

Then, when LD2.0 closed in and we were sufficiently well versed in Catan, we got an expansion for the game, because if there is one thing more expansive than an empire you can build in Catan, it is the merchandising department of the global megabrand itself.

And in this way we came to survive LD2.0. 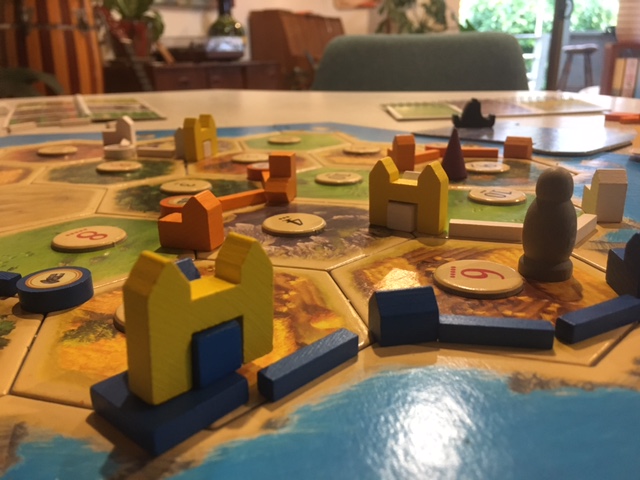 Most surprising of all though – even more than our enthusiastic embracing of this trade-based game - was seeing my son, who has ADHD, dyslexia and hates playing these type of games, take to it like a duck to water. It also had the added bonus of distracting him from his usual and many varied avoidance techniques around eating his dinner; if we played long enough the whole plate would be gone.

While not as sophisticated as chess, it involves strategy, critical thinking and planning, and rewards those who can think visually and who have good spatial awareness (ie not me). And so what the teacher and parent in me came to love was seeing my son’s so-called negative traits, constantly relayed to us from school staff about his learning and behaviour – things such as wily, cynical, stubborn, defiant – transform into strengths as he played to win, and repeatedly did so.

While my partner and I labored through the rulebooks, he learnt a good deal from sifting through the game items, pouring over the game cards, and taking in the visual details and clues from the packaging and board – so when I would struggle with a wordy, long-winded instruction, he would cut through with a simple and astute grasp, because he had picked things up, looked them over, and applied practical understanding. He was resolute, always three steps ahead of us, masterminding (and masquerading) his end game.

It was also pretty fascinating – having not usually been with him in a learning space prior to home school - to see how his inattentiveness presented as total disengagement. and while this is frustrating, and hard to manage, especially for school staff I’m sure, it was also actually pretty harmless, and more often than not, useful.

Sometimes, I would lookover and see him engrossed in building elaborate patterns and balancing towers out of his unused game pieces, and admonish him for not paying attention. Then it would be his turn and he’d wipe us off the board, because while stacking his pieces into intricate patterns he already planned it, processed it, and knew what he was going to do, and then, bored with waiting in the meantime, let himself drift away by creating cool patterns.

Outside of this soothing pattern making he appeared very chaotic and disordered though; his area of play was always a mess, and he was either faraway or was randomly interjecting at a million miles an hour. But again, underneath, he was organised, focused and in control. He repeatedly grew frustrated at my own poor decision-making and inability to plan ahead or to consider other people’s game play.

For me, these things, and the Catan as a Lazy Susan accompaniment to mealtimes, were pretty much enough to elevate the game above it’s problematic premise. But then there is also the fact that, while playing, you are so immersed in the mechanics of the game and focused on the score that you don’t think about land destruction, trade or development (which, now that I say it, I’m not sure is such a good thing….?!)

But maybe, what I mean, is that while I don’t endorse the problematic premise of these games, their propaganda like powers are ultimately pretty piss-weak. So maybe much like how I played Monopoly, Battleship and Game Of Life and then turned out to be a penniless peacenik who lives in sin with a ‘bastard child’, my son grow to be a defender of natural spaces, co-operative communities and small footprints. Praise be!

And till then, thanks, Catan