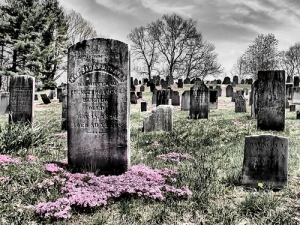 I recently completed an essay that began as a personal exploration of how my family approached the death and burial of my Grandfather, and then my father. It soon turned into a more theoretical piece as I began to unpack and explore social theory relating to working class approaches to death and funeral practices - looking  at shame, disgust and the exploitative nature of the commercial funeral industry.

I enjoyed working on this, feeling my way through a lot of personal thoughts and feelings, as well as becoming more familiar with some of the literature around structural inequalities and the classed based nature of even death, and I am proud of the finished product.

I have submitted it to an Oz lit journal and am now enduring the long wait and impossible silence that follows a submission (although also taking the wise advice of moving on an turning my attention elsewhere).

Here is the opening section of the essay:

When my grandfather died there was no funeral, only an informal and impromptu wake. I was still a teenager at the time and, in accordance with the firmly held family tradition of neglecting emotional discussions, I was exempt from any deeper details of how the lounge room wake came to be. All I really had to cling to was what was to become an oft-repeated phrase and family joke: ‘box em and dump em.’ Apparently this was my grandfather’s final wish, as he had scrawled it on the outside of the envelope containing his will.

For a long time I was embarrassed by my grandfather’s wish, an embarrassment that was entangled with a longstanding shame over my family’s crude and uncultured working-class ways. I was from the white, working-class western suburbs of Sydney and I had learnt, as I entered the imposing, privileged grounds of the University of Sydney, that this was a supposed source of shame. At university, the gaps in my knowledge and grammatical errors in my speech were met with open derision. I can still recall being scoffed at by a boy (from the Student Representative Council of all places) for writing up my mother’s job application: ‘You’re writing your mum’s resume for her?’ He was incredulous. The direction in which the social capital was supposed to flow was wrong – like a salmon swimming upstream, I represented the resource in the family that could provide improvements and create opportunities. The fact that my parents were not paving the way by passing on their privilege, or worse, were benefitting from mine, caused him to blow a gasket. And so I learned to keep things like ‘box em and dump em’ well-kept secrets.

The traditional markers of social position (such as education and finance) may have shifted, but what draws demarcations of class into sharp focus are measures of cultural ‘competence’: that is, our tastes, practices, and dispositions, as outlined by French sociologist Pierre Bourdieu in his book Distinction. What we like, what we want and how we say it doesn’t just allow us to be categorised according to class, it shames those who fall into the ‘wrong’ category. Just like my broad accent and tendency to drop my ‘h’s signalled something to my peers are university, I was afraid that ‘box em and dump em’ – bellowed by my bawdy, beer-bellied grandfather holding up his braces – would signify something crude and crass. And despite being canny, organic and autonomous, it would be reduced, under a socially conditioned public gaze, to something inferior. Or worse, something disgusting. British sociologist Imogen Tyler explains that one of the ways in which social class is not only formulated, but emotionally mediated, is through repeated expressions of disgust for those deemed to be of a lower social class. The affective aspects of how this operates is often overlooked, but quite obviously the correlating emotion to being judged as disgusting is shame.....